Make the best Christmas Ham with my simple recipe and tips! This delicious ham with a sweet glaze will be the star of your holiday dinner.

Why This Recipe Works

Baking ham for the holiday dinner could not be easier. If you are like me and like to buy the fully-cooked bone-in spiral cut ham, the only thing we need to worry about is the glaze. The ham is already cooked and sliced, we need to add flavor. I like the combination of orange juice, spices (cinnamon, cloves, ginger and allspice) with dark brown sugar (to keep the ham super juicy). It's perfect!

The saltiness of the ham and sweetness of the glaze go so well together! You can use brown sugar, honey or maple syrup for the base of the glaze. While most traditional recipes call for whole cloves studding the whole ham, I prefer to use the ground version and mix it into the glaze, especially since I'm using spiral-cut ham that would be hard to decorate with whole cloves.

How to make a ham glaze?

Combine butter, juice and brown sugar in a microwave-safe dish. Heat up in 20-second increments until butter is melted. Then microwave for 15-seconds at a time, until bubbly. Watch it because it can foam out of the cup. Do not overcook or you will end up with hard caramel.

How to bake Christmas ham?

How long do you cook ham?

Since the ham is already cooked, all you need to do is heat it up. I recommend baking it for 13 to 14 minutes per pound. You can also broil it for a minute or two to caramelize the glaze.

How to prevent ham from being dry?

To ensure that the ham is juicy and doesn't dry out, glaze it and cover it with aluminum foil before baking. You can also baste it every once in a while, with the juices that collect at the bottom of the pan. Baking it at low temperature ensures that the ham heats up through out without the outisde slices drying out.

What to serve with ham?

There are many delicious side dishes that can be served with ham. Here are just a few of our favorite:

What is the best ham to buy?

The most flavorful ham, in my opinion, is a fully-cooked bone-in ham. It will be more flavorful and juicy! I uses spiral-cut ham for convenience.

How to use leftover ham?

I always end up with some leftover ham. Fortunately, there are many delicious ways to use it! My ham casserole is the easiest and the Black Eyed Peas with Ham are great for your New Year's Eve celebrations. On a snowy day, I like to make my Ham and Corn Chowder or a Ham and Bean Soup and enjoy a big bowl with homemade biscuits. Don't forget to leave some for the Baked Ham and Cheese Sliders.

How much ham per person?

How do I know if the ham is done?

Since the ham is fully-cooked, all you need to do it warm it up. Use a meat thermometer to check the temperature. The ham is done once the internal temperature reaches at least 145 degrees Fahrenheit.

What can I use instead of brown sugar?

You can use honey or maple syrup.

Can I cook ham in the slow cooker?

First, check if your ham will fit in the slow cooker. You can cook it on LOW for 3 to 4 hours or until the internal temperature reaches 145 degrees Fahrenheit.

How to store leftover ham?

Any leftovers should be stored in a container with a lid, in the fridge, for up to 4 days. Use in sandwiches or recipes listed below.

If you like this recipe and make it, let me know in the comments below! Don't forget to rate it if you enjoyed it! 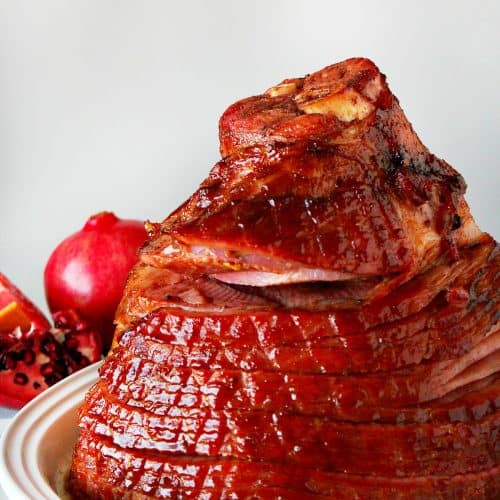