This snack. OMG. I am obsessed! And I am about to spread the obsession! Because you have to make it like yesterday. No other way to go about it.

I am a huge fan of cinnamon rolls. See these, these and this cake! There is just something comforting about the sweet cinnamon and creamy topping that makes you weak in the knees. Best weekend breakfast treat.

These pretzels were just supposed to be a simple snack. Coated with cinnamon sugar goodness and baked. Because I am crazy about cinnamon sugar treats lately. But then I got this crazy idea to drizzle white chocolate all over the batch! Remember, I have drizzle-all-the-desserts issue recently.

I made my Hubby taste-test them with me. As soon as we tried them, we both said: cinnamon rolls!! Heck yeah! Jackpot! Found gold!

If you go all crazy and decide to make this snack for a party this weekend - better make a double batch. This will go fast. It will be the hit of the party and you will become the host of the year.

You can thank me later. 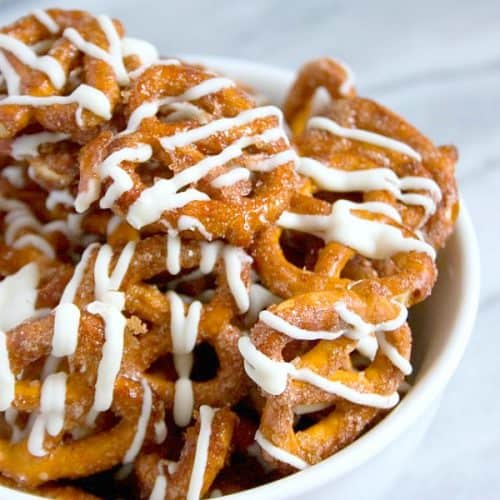